In the 1940s, Edward R. Murrow frequently visited Quaker Hill as the guest of Lowell Thomas. Once when Ed stayed for a month, the two men spent much time fishing in the area and golfing at Thomas’s country club. Each time they played golf near the third hole, Ed would gaze at a beautiful log house. This house was built by a prominent New York City judge, Thomas Murphy, whose inspiration was one of the buildings at the Finnish Pavilion at New York City’s 1939 World Expo. Murphy admired this building at the Pavilion for its simplicity, elegant design, and architectural splendor. Murphy brought the Finnish carpenters who created the building to Pawling to build the log house, which is the reason for the house’s clean and sturdy construction. In 1948, Ed and his wife Janet purchased the house from Murphy, after they just happened to ride a train to DC with the judge and his wife — Janet recalls that she knew that they were going to live in that house, even though she and Ed had never stepped foot in it.

Ed adored the house, especially due to its cabin feel and solid cedar logs, its proximity to the golf course, and most importantly its expansive views.

One of Ed’s interests was working the land and, as such, he cleared the land surrounding the house in order to open up the view westward towards the Hudson. For Ed, it was the perfect place to retreat.

Ed’s son Casey called the house Rumblewood from the sounds that the wind made moving through the eaves of the log cabin — and the name stuck.

The Murrows lived in the house through the 1950s. Later, Cliff Carpenter, known for being the voice of Terry Lee in Terry and the Pirates, and Jean Rouverol, known for her role in It’s a Gift, lived in Rumblewood from the 1960s until 2015. 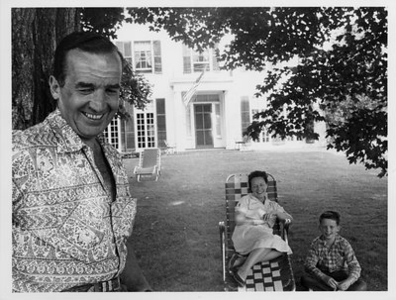 Ed, (left) with his family in Pawling NY

Rumblewood as it appeared in 1950

The Murrows heading from Rumblewood to the 4th of July parade 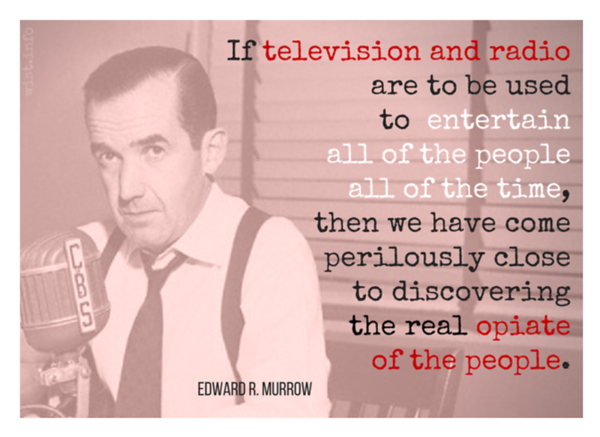